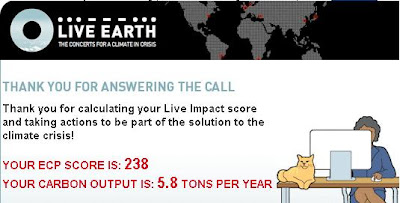 Rigel and I are sitting here watching Live Earth together. I was going to bring him out of his cage, but he squawked at me. I know I need to bring him out anyway, but I'm just not there yet.

I love John Mayer's music, and its pretty fitting for the concert. He also makes the oddest faces when he plays.

Can I just say that I never had any idea who Shakira was. And I still don't care, because this is a whole lotta shit. The emphasis she puts on things makes it impossible to know what she's saying, even though I'm fairly certain its english. So basically the song boils down to "look at how I can move in these high-heeled boots." But she looks incredibly awkward and uncomfortable, as if its me dancing, and that's never good. Eh. Gag.

Melissa Etheridge, I think you're great. So please understand, this is not a song. Please sing. That was quite a rant. I mean I agree, but still. Singing is your creative outlet, so sing, and leave the speeches to...

Okay, I don't know Alecia Keys either, but I like the opening instrumental. Playing some oldies? I didn't expect her to play her own piano either. Off to iTunes to see if I like any of her regular songs.

Someone tell me what Dave Matthews Meant when he said "Its a great honor to follow Jane Goodall." Maybe a little dig at Madonna? Anyway, I <3 Dave Matthews Band. Note to drummer: The stick-in-a-drum sound was neat, until you overdid it. At which point we become aware that we make the exact same sound with a straw and plastic lid. OH! Maybe that's part of the message, the sound of disposable goods.

Somehow my spaces don't show up until I type the next character. You have no idea what I mean, but I promise its pretty annoying.